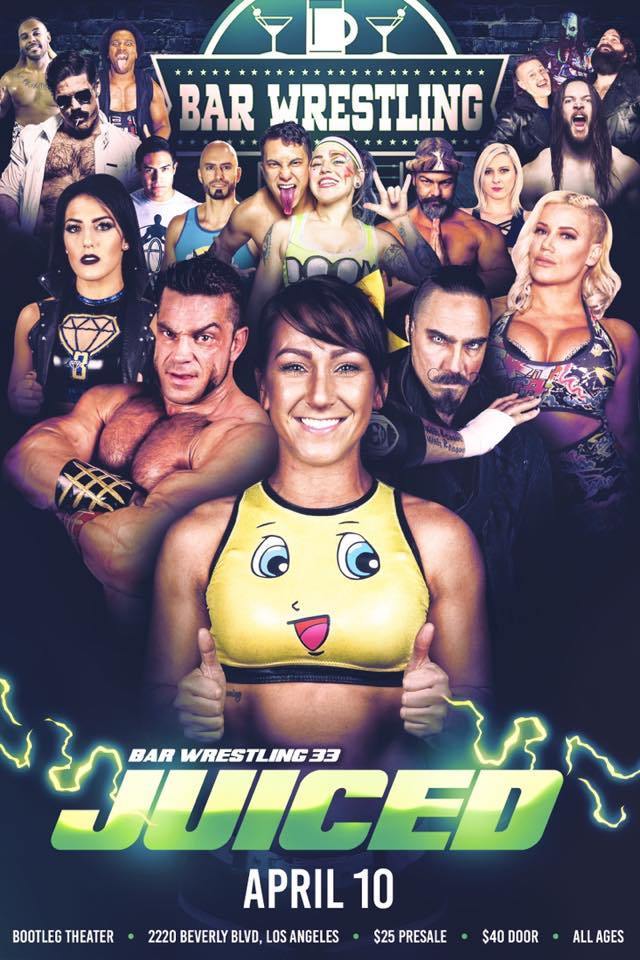 Hello, this is my first article for the Wrestling Examiner and coincidentally my first time at Bar Wrestling, clearly making me the most qualified person to do this write-up as long as you don’t think about the math for too long.  If you’ve never heard of Bar Wrestling before, it is NOT a new company run by Sheamus and Cesaro, rather it is exactly what it sounds like – wrestling in a bar. The Los Angeles based promotion created by Joey Ryan has been around since 2017, gaining mainstream attention on numerous occasions, including when Macaulay Culkin used Home Alone tactics to save Christmas.
Also earlier this year when AEW (All Elite Wrestling) made a surprise appearance.
Below are the results from the 33rd edition of Bar Wrestling, along with some miscellaneous notes along the way.
PRE-SHOW NOTES:
Match One: PJ Black (with Spider Monkey) Vs “Uptown” Andy Brown
-WINNER: PJ Black won via interference from Spider Monkey following a ref bump.
NOTES:

On a recent Ayahuasca retreat in the Jungle I came across a primitive tribe with a very unique fighting style. I especially bonded with this creature. He’s teaching me his ways and in return I’ll teach him mine. His tribe called him Mono. But from now on he’s called Spider Monkey. @spidermonkeylucha

Match Two: Tyler Bateman and Ryan Taylor (Out Of The Furnace) Vs Brandon Cutler and LuchaSaurus (A Father And His Dinosaur)
-WINNER(S): Tyler Bateman and Ryan Taylor won after Brandon Cutler accidentally took out LuchaSaurus.
NOTES:
Match Three: Heather Monroe Vs Eli Everfly
-WINNER: Heather Monroe won with an impressive Superplex-Michinoku Driver combo.
NOTES:
Match Four: Jake Atlas vs Daga
-WINNER: Daga
NOTES:
Match Five: PPRay (Peter Avalon and Ray Rosas) and Joey Ryan Vs The RockNES Monsters (BHK and YUMA) and Watts
-WINNER(S): PPRay and Joey Ryan won with a Triple Penis Flip (if you’ve never seen a Joey Ryan match, hope you enjoy the lack of further context!)
NOTES:
Match Six: Taya Valkyrie vs Kylie Rae
-WINNER: Taya Valkyrie won with the Road To Valahalla.
NOTES:
If you were at the show let me know your thoughts on it in the comments and how close you were to the ring. If you weren’t at the show let me know what you think of my recap. Thanks for reading!

Previous Possible New Roles For Road Dogg, More On WWE Creative Situation
Next Nia Jax Reportedly Out Of Action For A While Due To An Injury