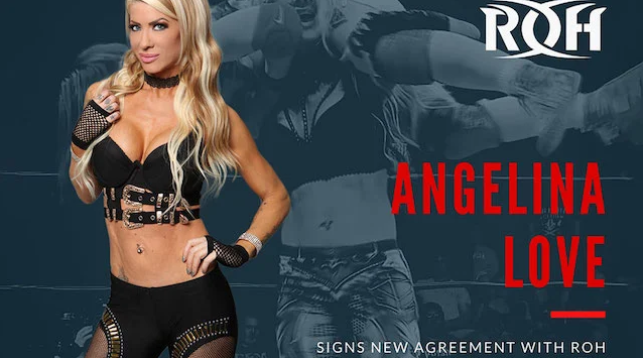 There were rumors that Angelina Love was thinking of leaving Ring of Honor, but looks like she is staying after all. ROH recently announced that the former World of Honor Champion has come to a new agreement with the company. You can see the full press release below.

Ring of Honor is pleased to announce that seven-time former world champion Angelina Love of The Allure has signed a new contract to remain with the company.

Love, who is nearing her 20th anniversary in professional wrestling, continues to perform at a high level. Since joining ROH last year, Love has been a valuable addition to the women’s division because of her recognizability and experience.

“I am extremely happy to have re-signed with Ring Of Honor,” Love said. “I’m very happy working here and look forward to continuing to take the women’s division to new heights this year and beyond. The Allüre will continue to dominate. Just watch.”

The Toronto native burst onto the scene in ROH last April when she and longtime associate Velvet Sky made a surprise appearance at G1 Supercard before a sold-out crowd at Madison Square Garden. The Allure — Love, Sky and ROH stalwart Mandy Leon — made an immediate impact.

Love went on to win ROH’s women’s world championship in September. Before coming to ROH, Love won six world titles and wrestled all over the U.S. as well as Europe and Mexico.