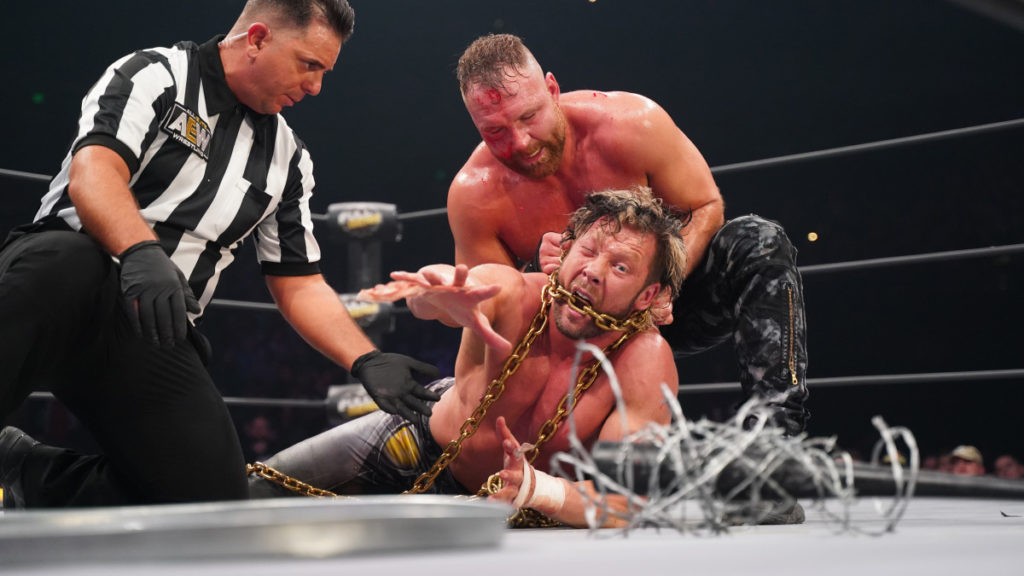 The Maryland State Athletic Commission has fined AEW $10,000 for the Kenny Omega vs Jon Moxley Lights Out match from last November’s Full Gear PPV. Chris Cruise, who is a former WCW announcer revealed the consent order that was given to AEW by the MSAC, who issued the fine based on their rules not allowing wrestlers to “deliberately lacerating oneself or one’s opponent, or, by any other means, introducing human or animal blood into the match.”

The Lights Out match saw both Moxley and Omega bleed. The fine was $5k per violation, and even though it was noted that “AEW took precautions to reduce the potential injury” to both wrestlers “blood was introduced.” The fine must be paid by AEW within 30 days.

Chris Cruise filed the initial complaint and then posted this on his Facebook:

“Look, the easy thing to say in response to the $10,000 fine levied on AEW by the MSAC is that it is pocket change for a billionaire. I get that. But it ain’t nuthin. And it is public, or will be on May 20th when the Commission meets and then posts the consent order on its website, and distributes it to all other commissions throughout the country. And keep in mind that the next violation will result in a revocation of their license in Maryland and possible show stoppage. In the middle of a match. The Commission is on notice now that others are watching its actions. This puts AEW on notice, as well, and it embarrasses the company. By this time tomorrow the story will have spread far and wide. And it will appear in mainstream publications. This is a black eye for AEW and for the business.”

Previous Triple H Sells Over $1 Million Worth of WWE Stock
Next The Revolt On Their Time In WWE, Asking For Their Release, Tag Team Wrestling & Much More