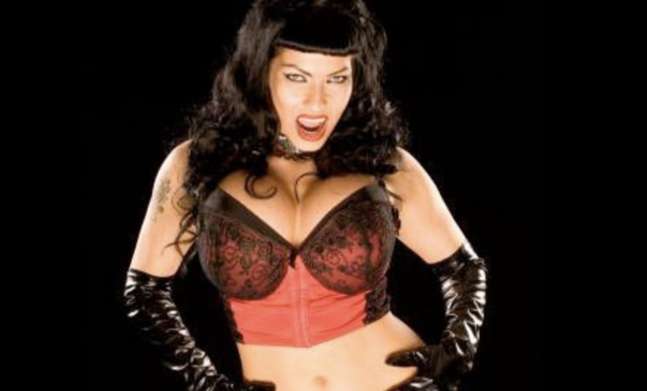 On the latest edition of the VOC Nation podcast, former ECW talent, and TNA valet Shelly Martinez spoke about several different topics including the differences between Dixie Carter and Stephanie McMahon, witnessing Jim Cornette attacking Santino Marella, and much more.

Shelly Martinez on differences between Stephanie McMahon and Dixie Carter:

“Stephanie McMahon was always very straight-forward with me, and I liked it. When she was straight-forward with me, it was never to cut me down or hurt my feelings. In fact, one time we were in the locker room for a girls meeting, and she was telling us how we can’t really have our butts hanging out – booty shorts – and she kept saying, ‘Like Ariel.’ I didn’t take any offense to it. She’s right. My butt, literally, is always out … Everyone, I could feel, was eyeing me, like, ‘Oooh. She’s picking on Ariel.’ Then, right before she broke the meeting, she goes, ‘I just want to say for the record, I’m not picking on Ariel. I just know that she can handle criticism.’ That, to me, meant so much. Not for one second did I think she was ganging up on me or trying to pick on me or anything … Whereas in TNA, when I went there … I assumed that, with Dixie Carter, [it was going to be] ‘A woman in charge! Yay! This is so inspiring!” … And the more and more I tried to connect with Dixie, the more and more she would just reject me. She was rude to me a couple times.”

“I get to OVW and … it was my first day there. I’m watching the show out by the crowd, and then I come inside and I’m watching on the monitor, and then I went to the bathroom. And when I came back from the bathroom I heard this yelling … I see Cornette, and he’s hitting Boris [Santino Marella], and I’m like, ‘What is going on?’ He was going crazy, this dude … I only know Jim Cornette from being around him. I always liked the way he treated me. From what I understand, he’s talked negatively about me, which is fine. But it does kind of hurt my feelings.”

Shelly Martinez on the possibility of a return to the business:

“I don’t care about money. Wrestling was never about money for me … I was at the bottom of the totem pole as far as pay went in ECW, because I was just a valet. I was very happy with what I was making … That’s all I ever wanted, to make enough money to help my sister and my grandma for whatever they needed … If somebody were to be like, ‘Hey, would you manage Kevin [Thorn] over here,’ or if WWE were to be like, ‘We want to bring you guys back, and you’re going to get this awesome payday out of it,’ I have no interest. What more is there to do? … The biggest heartbreak to me were the people who hurt my feelings. So if I were to go valet Kevin at a show, chances are I will see them. Why would I want to put myself in that situation? It’s like a break up. I broke up with wrestling. We’re done. I have somebody else. Why go to a nice fancy dinner invitation with my ex? … There’s no reason to go back into that world.”

Previous Sting & Randy Savage Joke Around Backstage (Video), Sting Special Added to WWE Network
Next Ross and Marshall Von Erich On Legacy Of Their Von Erich Name, Creating Their Own Journey, Handling The Pressure & Much More