Breaking News
Home / WWE / Sheamus on How The League of Nations Was Created to Put Over Roman Reigns, Who Came Up With The Idea

Sheamus on How The League of Nations Was Created to Put Over Roman Reigns, Who Came Up With The Idea 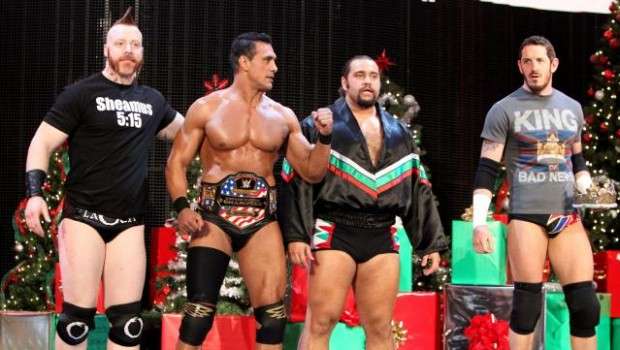 WWE Superstar Sheamus recently did an interview on Rusev’s YouTube channel, ToBeMiroTV, where he discussed the creation of the stable League of Nations, and how Jaime Noble was the person who came up with the idea.

Check out the highlights or watch the video interview below.

Sheamus on Jamie Noble coming up with the idea of the League of Nations:

“So, what happened was I had just beaten Roman [Reigns]. I cashed in the Money in the Bank. This was on a Sunday at Survivor Series. I didn’t even know I was going to cash in until that night. And then the next night on Raw, the day on Raw, they told us they had put this group together, the League of Nations. By the way, This whole came from Jamie Noble. I remember Jamie Noble telling me, ‘I got this idea! Hilarious!’ I was thinking, ‘OK. How’s this going to work? What’s the idea?’ There was no idea behind it. There was no plan behind it, and then on Raw, they just put the four of us together.”

Sheamus on losing their first match in a 4-on-1 to Roman Reigns:

“Even though all four of us individually were doing pretty good, pretty successful, and holding our own weight in the company. So, basically you had four strong heels, and they were put together to make a really weak faction called League of Nations. People talk about The Shield being this dominant, and all these other groups being dominant. The thing is like we could easily be like a hugely successful group, very dominant, but in our first match together, which was Smackdown after — so we debuted on Raw, then we beat up Roman, and then on Smackdown, we basically lost a four-on-one match to Roman. The very next day.”

Sheamus on how the group was booked to build Roman Reigns:

“You look at The Wyatt — You had The Wyatt Family. You had The Shield and everything. There’s no reason why we couldn’t have been just as dominant as those groups. Of course they’re dominant because that’s the way they’re booked. But we weren’t booked that way. We were literally booked to build Roman.”

Sheamus on how the group ended:

“They didn’t need four people, four top heels, to go in there into that group and do that. They could’ve had two, three, whatever. But yeah, when it started imploding, everyone in the group started losing our minds. That’s just like butting heads against everybody and just a complete disaster by the end. But at the end, I think all of us were just kind of like, ‘I’m glad that’s over.’”

Previous Big Show On Fighting Hard To Earn Undertaker’s Respect and Approval
Next Renee Young Reportedly Fully Recovered From COVID-19, Young and Jon Moxley To Be Tested This Week