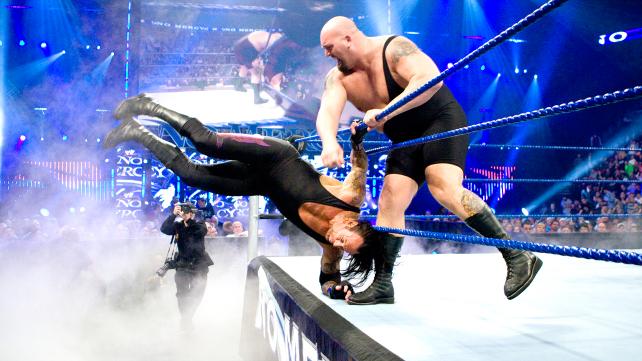 WWE Superstar Big Show recently did an interview with TalkSport, where he talked about having to fight really hard to earn the respect of Undertaker after he left WCW for WWE back in 1999.

“I had to fight really hard to earn Undertaker’s respect because one I got to quote-en-quote ‘sit under the learning tree’ I didn’t get free passes, I didn’t get exceptions. I didn’t get ‘oh, it’s OK. Don’t worry about it.’ My ass got chewed out every single night and the only thing I could try to do was not make the same mistake twice. He held me at a different level to the way I conducted myself out of the ring, the way I conducted myself in the locker room; he was just really instrumental in my career and shaping me into the talent and mentor I am now. I find myself transferring a lot of the lessons I learned to the talent now. Just common sense and experience things that help them on their way.”

“I remember working with ‘Taker in France in a coliseum that was built in 300AD by the Romans. They had used it for gladiator games, it was a hospice during the plague, they used it as a fortress to defend themselves – this arena had so much history. I wrestled ‘Taker that night and we probably went close to 40 minutes, maybe 43, 44 minutes. Mike Chioda was the referee and he nearly had a heart attack that night because ‘Taker and I wouldn’t tell him the finish. We were getting dressed in the locker room and Chioda comes in ‘OK guys, OK, OK, OK, OK! What’s the finish?’ and Taker goes ‘I don’t know, Show, what’s the finish?’ and I said ‘I don’t know, boss. You’re in charge, whatever you say.’ ‘Taker said ‘Well, Mike, we’ll just see what happens out there,’ and Chioda’s face was just a picture. Ya know, the ref kind of needs to know the finish [laughs] but it was one of those things where if someone taps out, that’s the match. If someone’s shoulders get pinned, that’s the match. And that’s as much planning as ‘Taker and I put into it going into that match that night. The way the acoustics were made in that stadium, even though it was an outdoor with no roof on it, when they chanted ‘Under-Taker!’ it’s almost like when you’re in the ocean and you feel the waves push up against you. You could feel that in the ring from that energy and it was just one of those magical moments for me in my career that I’ll never, ever forget. At the end of the night, after the match when everything was done – I think I ended up tapping out to the Gogoplata [Hell’s Gate] after Chokeslams and all kinds of crazy stuff that we did that night – we toasted. And he said ‘good job, kid. You made it.’ And that was, for me, my crowning [moment]. I made journeyman that night. I was no longer an apprentice, I became a journeyman. It’s a pretty big deal and it was pretty emotional for me. I’ll be honest, I worked for so many years and so hard to get that nod and I think I drove him nuts for the next couple of days because I was so appreciative of it.”

Previous Adam Cole On Kevin Owens Helping His Career And Taking Him Under His Wing
Next Sheamus on How The League of Nations Was Created to Put Over Roman Reigns, Who Came Up With The Idea