JBL On Kurt Angle & Eddie Guerrero Getting Into Physical Fight 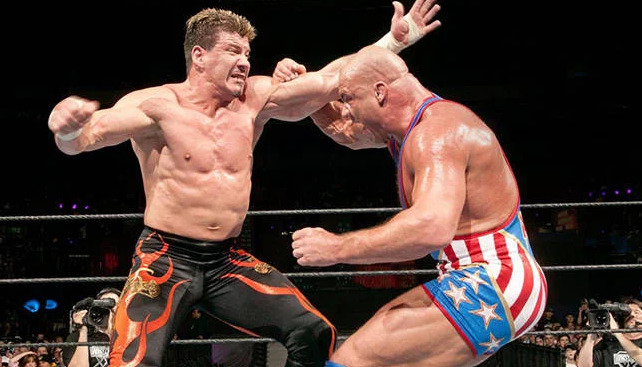 Recently JBL went to Twitter to post a really funny story about Kurt Angle and Eddie Guerrero getting into a backstage fight. He even mentions how Eddie tried to leg dive Angle, even though he was an Olympic Gold Medalist. Check out the story, and watch the full video below.

JBL on how he always sit near Eddie Guerrero in the locker room:

“I was sitting like this in a dressing room one time all by myself. And back in the day, WWE usually had communal locker rooms, so you’d really dress near guys you wanted to talk to because a lot of guys were friends, that’s where the cliques developed, from that. And I’d always sit near Eddie Guerrero, enjoyed talking with Eddie, BSing with Eddie.”

JBL on how Kurt Angle & Eddie Guerrero got into a physical fight backstage:

JBL on asking Eddie Guerrero why he would leg dive Kurt Angle:

Update from my man cave with a story about a real backstage fight between two good friends Eddie Guerrero and ⁦@RealKurtAngle⁩ pic.twitter.com/ITHDwtSd9B