Eddie Guerrero – How He Lied, Cheated and Stole Our Hearts 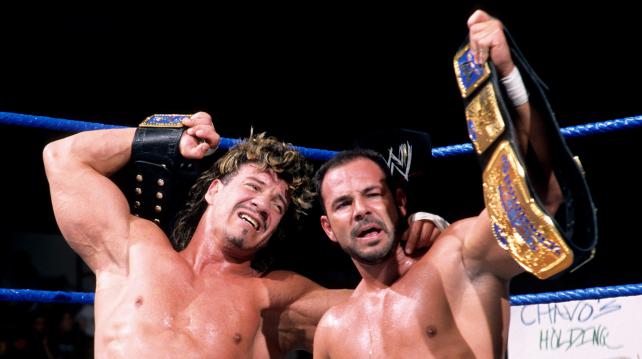 After a run on the independent circuit, which included a match on Ring of Honor‘s debut show “The Era of Honor Begins,” Eddie returned to WWE on April 1, 2002. He would target Rob Van Dam and the Intercontinental Championship upon his return, defeating Van Dam and claiming the title at Backlash. He would drop the Intercontinental Championship back to RVD, in one of the best ladder matches in WWE history, on an episode of Monday Night Raw. In August of 2002 WWE split brands. Guerrero was drafted to Smackdown, and began wrestling exclusively for the blue team. Becoming exclusive to Smackdown would prove to be one of the best things to happen in Eddie’s career. Alongside his nephew Chavo Guerrero, Eddie would go on to form Los Guerreros, arguably the most popular tag team in Smackdown history. Eddie, Chavo, Rey Mysterio, Edge, Chris Benoit, and Kurt Angle became known as “The Smackdown 6,” and were considered anchors for the brand. They had great matches against each other, often stealing the show on any card they were on, and briefly helped propel Smackdown to “A” show status over Monday Night Raw.