Earlier this week, Jay White defeated Hiroshi Tanahashi to become The New IWGP Heavyweight Champion during the main event of NJPW’s The New Beginning in Osaka. Apparently, a key reason that White has reached the top of NJPW and obtained The IWGP Heavyweight Title so fast is directly correlated to Kenny Omega leaving the company.

On a recent edition of The Wrestling Observer Radio Program, Dave Meltzer explained that NJPW & ROH’s combined show, G1 Supercard, was originally supposed to be headlined by Kenny Omega vs. Okada for The IWGP Heavyweight Title. Omega would have never lost The IWGP Heavyweight Title and he would still be holding it until April in the scenario New Japan Officials reportedly had planned.

When New Japan became aware of Omega weighing his options with WWE & AEW, they decided to put the title back on Tanahashi. Once Omega officially signed with AEW, NJPW made the decision to have White fill in the booking void that Omega left behind and secure The IWGP Heavyweight Title.

It was noted that the main event at G1 Supercard will likely be Okada vs. White if they continue using Omega’s booking with White as his substitute. 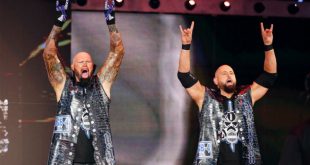