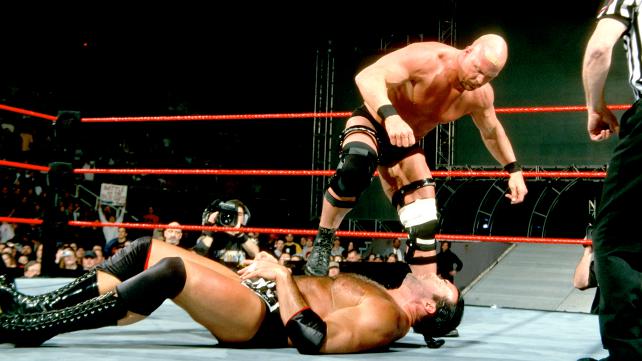 During the latest edition of the Grilling Jr podcast, Jim Ross talked about Stone Cold Steve Austin getting upset prior to his match with Scott Hall at WrestleMania 18, over Hall showing up hungover from drinking the night before. Austin demanded that the planned finish be changed and have him go over due to the lack of professionalism Hall was displaying.

Vince McMahon supposedly allowed Austin to assume the was getting his way, but according to some reports, the finish was already to go Austin’s way, as it was changed a few days prior. The decision to change the finish upset Hall, Kevin Nash and Sean Waltman, who believed that the nWo would lose a lot of their heat if both Hulk Hogan (facing The Rock) and now Hall lost in the same show.

Check out the highlights or listen to the full podcast below

Jim Ross on hearing about the plan to have Scott Hall go over Steve Austin at WrestleMania 18:

“I heard about, the writing team saying, ‘Well, we’re gonna do the heat thing with Austin, we’re gonna beat him with Scott.’ I said, ‘You’re what? Are you shitting me? What’s the logic behind that?’ And I said, ‘Have you communicated that to the talent?’ ‘Oh, no, no, we haven’t said a word, just between us and Vince.’ So I go to Vince, ‘Are we going to beat Austin at WrestleMania?’ ‘Well, I’m thinking about it.’ I said, ‘I think it’s a bad decision.’ Because that’s the way Vince and I communicated one on one. He didn’t want bullshit. I didn’t challenge him to the point of being obnoxious. I just said I think that’s the wrong decision to make. I think it’s the wrong decision to make and I think it’s going to fucking piss off Steve because he knows he can’t have the match he wants to have at WrestleMania.”

Jim Ross on Scott Hall still having issues with his drinking:

“It was very disconcerting, that Scott would have this great opportunity to come back, and be in play at this level, no matter the finish. This bullshit about, if we get beat at WrestleMania, it’s gonna kill us. Then you must have zero fucking confidence in your goddamn work. You’re telling me you’re not a good enough worker to lose and maintain your credibility? That’s the art form of pro-wrestling. It was a tipoff that we’re still in choppy waters. Again, holding out hope that Scott, maybe just having a night out, maybe he got over served, maybe somebody brought in to many drinks, whatever, try to make every excuse you can, but the bottomline was, there was evidence there that Scott still had issues that he was having a challenging time dealing with.”

Jim Ross on if Steve Austin was justified in being upset over getting a thrown together program with Scott Hall at WrestleMania 18:

“Yes, absolutely, because it felt so thrown together with short term thinking. Here’s the other thing about that. We had guys on our roster that deserved that opportunity with Steve at WrestleMania, to work with Austin at WrestleMania is gonna help you get over whether you win or you lose.”

“The way you deal with Stone Cold is you deal with him straight up. You give him the story, here’s the headline, here’s what we want to do, and then you back it up with fact or reason or whatever it may be. But whatever you do, you don’t become deceptive with this deal, and that’s what I think Steve felt like, that he was being worked. And whether he was or he wasn’t, I don’t think anybody would work Stone Cold purposefully, intentionally, but that’s how it came off.”

“He was taken for granted, and he was put in this position that did not fit who he was. It was bad casting.”