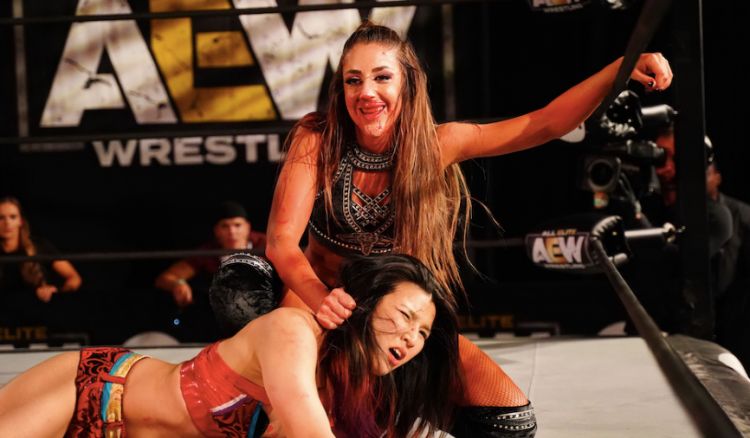 Britt Baker was recently a guest on the AEW Unrestricted podcast where she discussed several topics, including how her heel turn came about, Cody Rhodes telling her that she would be a great heel, getting help and inspiration from Chris Jericho on her heel character, and much more.

“Okay, so this was something, when I — the first video package I did which was for Double or Nothing, Cody set up. When Cody watched it back, he says, ‘Yeah, that was great, but you’re going to be a great heel one day.’ And this was a huge babyface package. I’m like, ‘What?’ And then just naturally, and it was kind of heartbreaking to me as the fans kind of turned on, ‘Oh, she’s a dentist,’ and it became a joke, and it was like a mockery. And that is crushing when you literally spent blood, sweat and tears, worked your ass off to become a dentist and a professional wrestler, and then it’s just something — it’s just like a meme or something to joke about? That really sucked, and that’s something that I was beating myself up over so much. I was like, ‘Oh my gosh. Now what? That’s my thing!’ That’s what I worked so hard to do. That’s why I announced myself as Dr. Britt Baker DMD…

“So that was really hard for me at first. Just, the joking. ‘Oh, she’s a dentist. She’s a dentist.’ Because for me, it’s not a joke. Those were the hardest years of my life. That’s one of the biggest accomplishments I will ever have.”

Britt Baker on how her heel turn came into the discussion:

“And then it was actually Kenny who, we were just training in the ring one day and he said, ‘How do you feel about becoming a heel?’ And I was, ‘Sure, I’m up for anything. With that being said, I have zero experience as being a heel.’ I’ve been booked as a babyface my whole life. I maybe had like two quick indie matches where they’re like, Hhey just be heel today,’ where I’m like,’Oh God. I don’t know what I’m doing. And then Tony and Cody kind of got on board with it too, like, ‘Hey, yeah we’re going to turn you heel.’ And I was like, ‘Oh my gosh, here we go.’”

Britt Baker on getting inspiration from Chris Jericho:

“I cut a promo on Riho at that Jacksonville show. And I had Twitter responses saying like, ‘Wow, she really resembles Chris Jericho from WCW calling himself a role model.’ And I was like, ‘Oh my gosh, wait.’ So I went back and watched so much Chris Jericho role model stuff. That is honestly — everything you see me now, I’m getting ideas from Chris Jericho back then. And I went to him right away. I was like, ‘Hey, Jericho. I have this idea. What do you think? I think I could kind of like–‘ And he’s like, ‘Oh my gosh, you have to run with that. That’s perfect. You’re the dentist, you’re pretty, you’re in shape.’ He said, ‘Rub it in their faces, but you’re the role model.’ And that was it. Then I texted Tony Khan, ‘Hey, I have this idea since I’m going to turn heel. What if we do something like this?’ And that was it.”

Britt Baker on Chris Jericho helping her out:

“I can’t say enough good things about Chris Jericho. He helps me so much with with some of these heel promos, like I’ll have an idea and run it by him and he’ll tweak it this way or this way: ‘Remember, yo’re a role model. You’re not just gonna go, you know, talk s**t in front of everyone. You’re a role model too.’ So having him with the minor tweaks there? It’s invaluable.”