Aubrey Edwards On Being Scared to Referee The First AEW World Title Match, Main Eventing a PPV Was a Career Goal 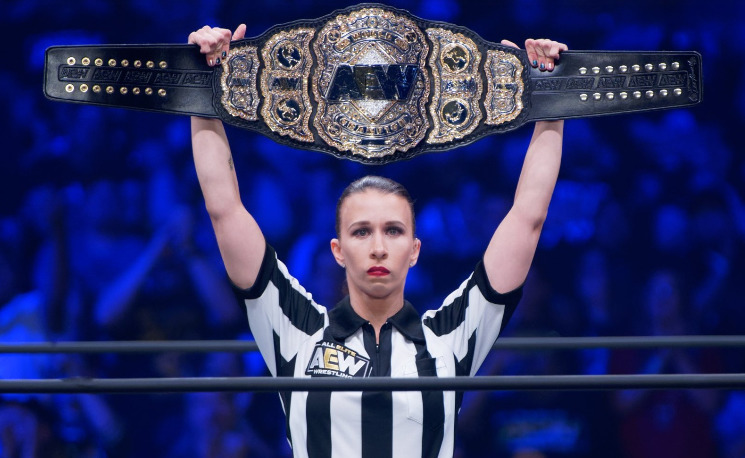 AEW referee Aubrey Edwards recently was a guest on Talk is Jericho, where she discussed several topics, including her career, her time in AEW, refereeing a PPV match and how nervous she was, plus much more

Chris Jericho on asking to have Aubrey Edwards referee the match:

“It’s funny, because I was — once again, coming here and I knew a few people. There’s a lot of people I don’t know, so you’re just watching the matches and seeing everybody’s vibe. And I remember, I said to Cody, ‘She’s really good as a ref,’ right? And that’s when I was thinking, ‘Okay, we’re doing this title match with with Hangman. I want to have Aubrey, the first ever female ref in a world heavyweight title match.’”

Aubrey Edwards on being nervous during the match:

“[It was] terrifying. [laughs] I’m not going lie, I was scared in that match. People ask me like, what my favorite match is, and they assume it’s that one. I’m like, ‘Oh, no.’ I was all in my head, I was so worried. It’s my first time working with Chris. Turns out he’s — you’re cool, great, cool guy and super easy to work with. But I’m like, ‘I just don’t wanna f**k up.’ I’m so nervous. I’m worried I’m just going to drop the belt because it’s like 40 pounds. I was so in my head about that whole thing, that I don’t think I enjoyed it in the moment. Now, watching it back after I’m like, ‘Okay, this was good. I’m happy with my performance. I could have done a couple things differently/.’ But yeah, I was nerve-racked.”

Aubrey Edwards on working the main event of a PPV being one of her goals:

“I was incredibly grateful for that. Honestly, one of my career goals was to main event a PPV someday. And to do that just after I have my two-year anniversary in the business is absolutely insane. So I can’t thank you enough for the opportunity. It was great.”

Previous David Arquette Says Robert Stone Sucks As A Manager, Comparing Him To A Parent Of A Child Actor
Next Ligero Released By WWE