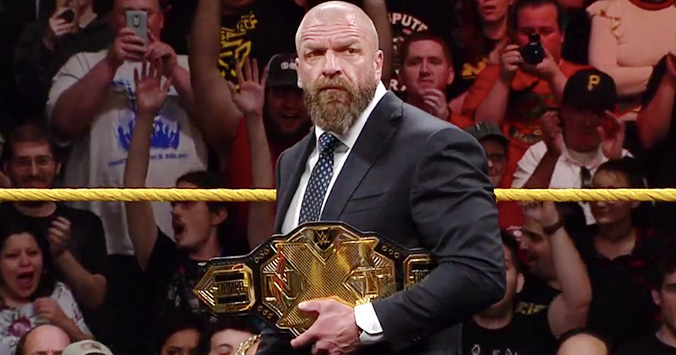 Following NXT TakeOver: In Your House, Triple H held a media call about the event. He talked about the event, and where things might possibly go from there.

Check out some of the highlights or listen to the full call below.

* Triple H said he thought they had a great show and thanked everyone involved given all the things in the world right now. He pointed out the old set and Pettengill’s appearances and everything else which for a great nostalgic, fun show that had all the action and storytelling of NXT. He talked about the performance that opened the show and how it kicked off from there. He says they highlighted the depth of the women’s division, and that Damian Priest had a star-making night, while Keith Lee and Johnny Gargano was the expected epic storytelling. He said Karrion Kross had a star-making start and put over Rhea Ripley, Io Shirai, and Charlotte Flair with Flair making new stars. He also said that the off-site of the Backlot Brawl delivered. He knows there will be plenty of opinions on that and says it’s awesome, but it was a stellar effort across the board. He said he’s proud of everyone who came together as a team and said he told the talent after the show that everyone all over the world, all different walks of life came together as a team and family to create and to perform, especially today.

* Asked about Charlotte Flair’s status going forward with NXT, he said they’ll see where it goes from here. He said she’s always been a Raw talent and has been working all three brands in essence. He said they’ll see where it goes but he’s very excited now for Io Shirai’s reign. He calls her a game-changing talent like Asuka and said she’s one of the greatest in-ring performers in the division anywhere and this is a new era for the division. He added you look at the women’s division right now and it’s incredible stacked and incredibly talented. He looks forward to great things from all of the women.

* Asked about the return of Todd Pettingill the old sets, and whether Michael Hayes will cut his hair to return as Doc Hendricks, Triple H said he tried very hard for the Hayes thing but his refusal was loud and intense. He said the nostalgic moments, especially right now, whether you’re old enough to remember or not, is so right there to everybody to see and people who don’t get it will get it when they rewatch. He mentions William Regal’s Lord Alfred Hayes voice and promotional consideration vignettes. He said he thinks it could absolutely come back. You think outside the box and sometimes it does, some things don’t, but this one worked and could well come back. He calls it today’s WWE action with lots of nostalgia feels that delivered.

* Asked about what WWE is doing to work on talent development without Florida house shows, he said said that’s the next step of what they’ll look to do. They’ve been working with officials to figure out what they can do, and they couldn’t do the training environments even when they were producing shows. They’re now allowed into the training environment and they’re going to ramp that up. In the meantime they’ve been doing extensive time with skull sessions, watching films together through Zoom chats with Shawn Michaels and Sara Del Rey. There have been some online acting classes for some performers and they’re doing everything possible to keep things moving ahead under tough circumstances. He adds when they can all get back in arenas in front of small audiences, they’ll be right back at it but doing it in a way that’s healthy for the talent because that’s their first and foremost concern.

* Asked about the next wave of talents like Timothy Thatcher, Dexter Lumis, and Karrion Kross, HHH said you have to continue moving forward and creating new, fresh blood. You don’t have to move then all on to other brands, but he remembers being asked early on about the idea of talents leaving to the main roster and gutting the developmental and he’d always say that’s a strength and not a weakness. He noted that yearly cards like Takeover: Brooklyn would have no talents on successive years. He mentions homegrown talents like Braun Strowman, Baron Corbin and Charlotte Flair who people forget were entirely homegrown. He says that there are some buys that will be anchors and cornerstones while you build new talents and have people like Finn Balor and Charlotte Flair return. He says that to him the future has never been brighter and there are even guys below the new wave who are being made ready and have made progress like Cameron Grimes, Bronson Reed, and Aliyah. He’s proud of the veterans’ team player mindset to help develop talent is huge.

* He was asked about his change in title and his new responsibilities, and he said while a huge deal was made out of it, it didn’t change his duties and was just about the duties he had with NXT going live and the localization of global branches of NXT. His duties are the same as before, he simply doesn’t have the day to day responsibilities of logistics like travel, talent relations, live events and the like.

* Triple H was asked about the potential for Velveteen Dream or others going to the main roster and said there’s always a chance, because staying in one place can only last so long. Finn Balor returning to NXT is an example. With Dream, it’s “wait and see” but there will always be talent moving. It’s not always as obvious as someone losing a match like Dream and leaving and surprises and shocks make the product more fun.

* Asked about Adam Cole and Keith Lee, he praised both men. He said he can’t say enough good things about Cole as a performer and a professional, and a leader. He’s the kind of guy you want as a contributor but also to work with and help succeed. As for Lee, he said that he agrees that Lee could be a future world champion. It wouldn’t shock him and Lee has every tool needed. He called Lee a “moment-making machine” and that like Cole, Lee is just a great guy and a guy you want to work with.

* Asked about potential injuries, ha said the only thing he knows of is that Johnny Gargano’s lower back and hips are tweaked a bit and the doctor didn’t think it was serious, but he was a bit battered. Everyone else seemed to be great and healthy, though he noted “adrenaline is a magical thing.” He says everyone was hyped after the show and felt elated. Once it cools down, they’ll see bit it was a physical night and that inspired them to work hard.

* Triple H was asked his infamous “Hog Pen” match and if it was punishment for the Curtain Call. He said he thought it was before the Curtain Call but he could be wrong. He says nobody wanted to get hit with Henry Godwin’s slop and that he went to Vince and said that if Godwin was turned babyface, he’d do it. As a snob heel, it was perfect to have him get covered in mess. He said he loved it and thought it was phenomenal. He could have maybe done without quite so much crap in the pen, because the pigs were huge and in the pen all day. He said the farmer told him to watch his fingers because the pigs could conceivably bite them off. He said it was one of his first really memorable things in WWE and people still talk to him about it. He mentioned how when they traveled the match around the country, fans began to bring plastic sheets for the slop match as if it was a Gallagher concert.

* Asked about Io Shirai winning the title while not pinning Charlotte, he said it wasn’t done to protect Flair but instead to set up long-term storytelling. He said they have a very long-term vision for this and the decision was for something very specific. He put over Flair some more and said that hopefully in the coming months we’ll know why it was done that way.

* Asked about Damien Priest vs. Finn Balor, he put over Finn as being consistently good and said he was incredible, while reiterating that Priest had a star-making performance. He said that he’s been handed the ball a lot and at times it’s been maybe a overwhelming for him but tonight he felt like Priest really performed and gave us “him.” He was in the moment and it was real, and is the night he thinks Damian Priest arrived.

* He then finally thanked everyone for participating and put over those behind the scenes from the crew to the graphic designers to Code Orange, to the talent, to the behind the scenes staff. It’s not an ideal circumstance and it was a true team effort that he hopes people appreciate.