Ring Of Honor recently announced that Jeff Cobb and Dan Maff will be taking on Bullet Club members KENTA and Taiji Ishimori at their upcoming Supercard Of Honor XIV Event.

ROH Supercard Of Honor XIV is set to take place on Saturday, April 4th from The RP Funding Center in Lakeland, Florida.

Below is the updated card for the upcoming ROH Supercard Of Honor XIV Event: 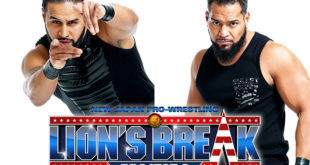